This page shows Nolina microcarpa, a succulent, caudex-bearing, grass-like species that is (above ground, at least) reminiscent of a yucca or Hesperaloe parviflora. Locally known by the common epithets Beargrass and Sacahuista, N microcarpa is in the Nolinaceae family (or Agavaceae or Liliaceae, depending upon the author). Habitat includes rocky uplands in Arizona, southern New Mexico, Trans-Pecos Texas, and northern Chihuahua and Sonora, Mexico at 3,000 to 6,500 feet elevation. In southern Arizona, N microcarpa occurs in the Chaparral and Pinyon-Oak zones. Other members of the genus that are geographically close include N texana to the east in New Mexico and N bigelovii to the northwest in Arizona and California. N microcarpa has a large, woody caudex, from which emanates a rosette of extremely strong, fibrous leaves up to 1.5m long and 4x8mm at the base. The glaucous leaves are edged with tiny, raspy teeth. In late May, a prolific quantity of flowers is borne on multi-branched panicles that can reach 2.5m height. Presumably because of their length, strength, and flexibility, Native Americans historically have used N microcarpa leaves in basketry. Rosettes can form a graceful fountain shape that is attractive for landscape use. Nolina microcarpa enjoys coarse, well drained granitic soil and full sun, and is hardy to 0°F.  [ 8 slides ] 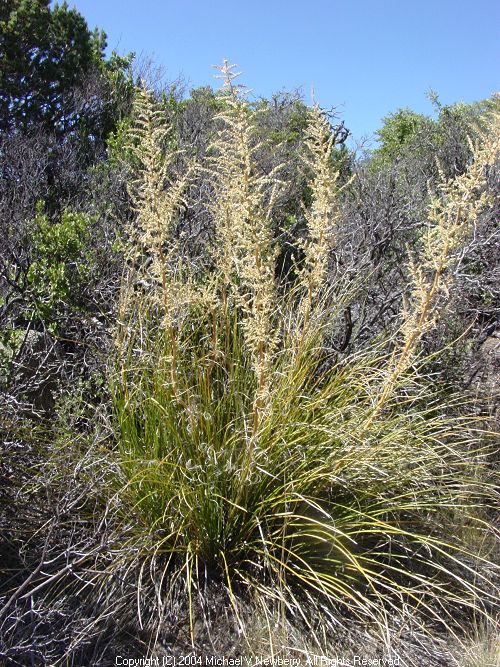